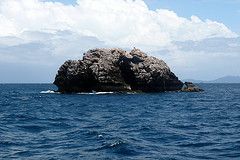 Sail Rock is another of the better dive sites in the Gulf of Thailand and the closest of the good Koh Samui dive sites. It is located between Samui and Koh Phangnan and can also be reached by dive boat from Koh Tao. As Sail rock is alone in open sea it’s a magnet to all the marine life in the area and as well as all the usual schools of fish seen here divers can also get lucky and catch sight of a passing whale shark or manta ray.

The rock is a large granite boulder that juts out of the sea and drops below the surface down to 30m. The dive site has two permanent moorings but as there are usually more than two dive boats at the site at the same time the boats moor up to each other. Visibility is better here than at most Gulf of Thailand dive sites. Currents can be strong at times but there are plenty of areas to find shelter as you circle the rock.

Away from the main rock are some smaller boulders that are home to reef sharks. Schools of trevally can be seen raiding bait fish balls. Schools of inquisitive long fin bat fish are always present. Barracuda can also be seen in the blue. Gorgonian sea fans and barrel sponges mingle with encrusting corals on the rock walls. Look for boxer shrimps and hingebeak shrimps in crevices. Moray eels are numerous including undulated and white eyed morays. Trigger fish, banner fish, butterfly fish and rabbit fish will also be spotted here.

The most famous section of the dive site is called “the Chimney,” a vertical swim-through in the rocks. There are three entrances/exits, one at 6m, one at 10m and one at 18m. Myriads of small fish inhabit the inner cavern like area and glass fish cover the exits until you swim through and they part around you. Scorpion fish are well camouflaged so be careful with your buoyancy. The shallowest exit hole at 6m is surrounded by sea anemones and clown fish. 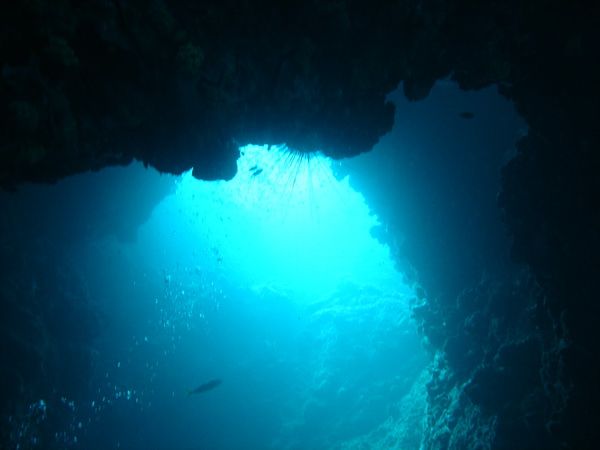 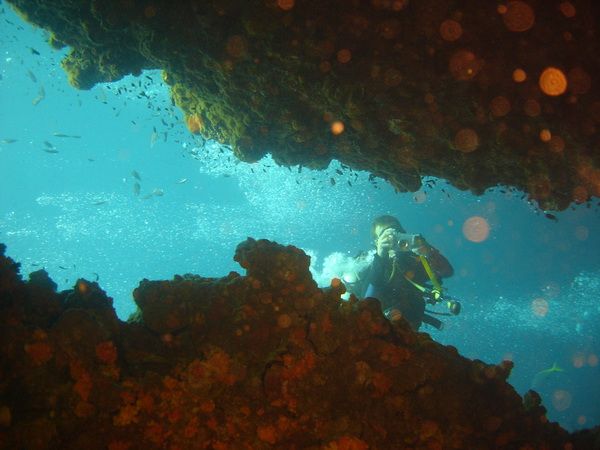