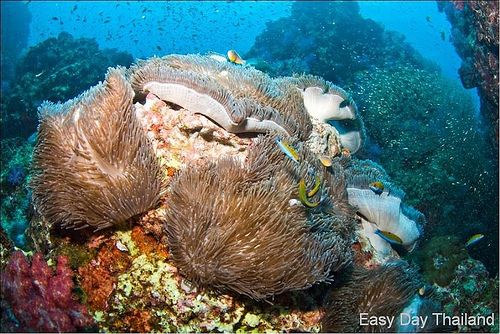 Garang Heng is a dive site that is only visited by Phi Phi diving day trip boats, it is a little too far for Phuket dive boats to reach. It lies on it’s own 2 km east of Phi Phi Ley and is a completely submerged reef starting at 6m below the surface and going down as deep as 24m. It is an easy dive site with mild currents although visibility is often only average. This is another dive site where Leopard sharks are commonly seen.

The reef is a mixture of hard and soft corals with some barrel sponges, and lots of sea fans and anemones. Large schools of yellow tail barracuda are resident here. Lion fish and scorpion fish are numerous as are dog faced puffer fish, moorish idols, banner fish and many other reef fish. Banded sea snakes are also sometimes seen here.

Located 8 km south east of Koh Phi Phi Ley, Hin Bida is often referred to as Phi Phi Shark Point. It should not be mistaken for another shark point that lies half way between Phuket Island and Phi Phi Islands and is also dived by day trips from Phi Phi. Hin Bida is usually only visited by Phi Phi day trip boats which take about 45 minutes to reach the rock. It’s named Shark Point because if the high likelihood of seeing Leopard sharks here. During the day they are usually sleeping on the sandy bottom at the edge of the reef but can often be seen gracefully swimming as well.

The top of Hin Bida (Hin means rock in Thai) just breaks the water surface. Underwater the coral covered rocks stretch out in a north to south direction down to a maximum of 20m. Giant clams and barrel sponges are scattered around. Feather stars, Christmas tree worms and tube worms fight for space on the corals. Schools of fish occupy the reef including snapper, banner fish and butterfly fish. In the rock crevices are moray eels, octopus and crabs hide themselves.

Visibility varies here from 5m to 20m and currents are normally mild.

Loh Samah Bay is located on the east side of Phi Phi Ley and is actually separated from Maya Beach by a very narrow cut in the rocks that it’s possible to walk through. Loh Samah Bay is also popular with snorkeling trips.

The diving is done around a small islet that fills the bay. It is possible to circle the island at least once on one tank of air. It’s a wall dive, on it’s outer side reaching 20m and coming shallower on the inner side. There is a narrow channel that divers can just swim through without disturbing the beautiful soft corals and gorgonian sea fans on either side. The wall is covered in corals and clams and is home to all the usual Phi Phi dive site marine life. Turtles are common here too and are often seen ripping at the bubble coral.

Loh Samah bay is an excellent night dive spot when coral polyps come out to feed and torches really show up the colour of the wall. Shrimps, lobster and crabs are all over the wall. Moray eels are more active at night whereas parrot fish are sleeping in their protective cocoon.

Maya Bay was made famous by “The Beach” movie and these days tourists come here looking for the deserted paradise that the movie portrayed, only to find that hundreds of other tourists in speed boats are already there. Despite the crowds it’s still easy to see why Hollywood chose this setting. The natural beauty of the island is breathtaking. The bay is a popular snorkeling spot but is good for diving also, especially for less experienced divers or for dive training.

Limestone rocks for cracks and crevices that are full of life and coral bommies scatter the sand. There are some swim-throughs and small caverns to explore.

Update 2016. Currently no diving is permitted inside Maya bay because of the danger from boat traffic. Besides, the dive sites become more interesting when you venture outside of the bay either north or south.

Maya Wall North is more frequently dived than the south and is buoyed at several points along it’s length. The dive site drops to a maximum depth of 30m in the sand but most of the dive will be spent around 10-20m depth. Around the northern most mooring buoy it is common to see schools of small black tip reef sharks circling. Snorkelers can also see them from the surface. Leopard sharks are often seen here too and hawksbill turtles are common. Other fishy residents here are titan trigger fish, puffer fish, octopus, parrot fish and moray eels.

Hin Dot or Chimney Rock is located on the south west side of Ton sai bay which is the main harbour in the Phi Phi islands so only a short boat ride is required to reach the site. The pinnacle formation drops down to 30m and has pronounced shelves at 15m 12m and 3m making it an excellent multi-level dive.

The pinnacles attract huge numbers of schooling fish including snapper, fusiliers and jacks. Zigzag clams cover the lower portions of the dive site along with a few giant clams. Nurse sharks can be found under the rocks at the bottom. Soft corals, hard corals and crinoids are more vibrant towards the top of the pinnacle.

Wang Long is located on the south east edge of Phi Phi Don and is only dived by experienced and suitably trained divers. This is a cave dive. Two caves enter the rock wall and meet up in a larger inner cave where it is possible to surface. Currents are mild and the maximum depth is just 20m. Visibility is 5-15m.