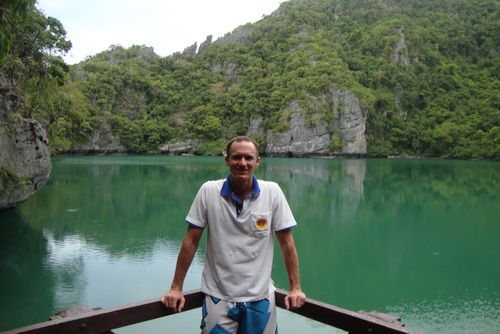 Ang Thong means golden bowl in Thai and is the name given to the marine national park consisting of 41 limestone islands in an archipelago in the Gulf of Thailand off the east coast of Surat Thani province. The mostly uninhabited islands are beautiful above water consisting of thick jungle and pristine beaches. Below water the dive sites have deteriorated due to river run off and over fishing.

The best dive sites are at the north of the park where freshwater run off has less of an effect and corals are healthier. The best time to dive Ang Thong is January to April.

Hin Yippon or Japanese Rock is located at the northern most point of Ang Thong marine park and it is about 2 hours by boat from Koh Phangnan or Koh Samui. This dive site is a combination of boulders and hard coral reef. The boulders form caverns and swim-throughs. Barrel sponges and sea fans add colour. Parrotfish, wrasse, fusilier, snapper and pufferish are common sightings. The maximum depth is 30m and currents are not usually strong. Visibility ranges from 5-20m

Koh Wao is located to the south west of Hin Yippon and the dive site is on the north western site of the island, starting in the sheltered bay there. Maximum depth is 20m with minimal currents and 5-20m visibility. Coral is maining hard coral including staghorn, vase and table coral. There are some barrel sponges and sea anemones with resident clownfish. Scorpion fishes can be seen and there are several species of nudibranch present. On the northern tip schools of fish include snapper, fusilier, trevally and yellow tail barracuda. Cuttlefish mate here. Turtles can also be seen.