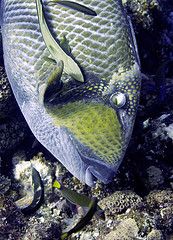 Chumphon Town is the small provincial capital of Chumphon province 500km south of Bangkok on the east coast of Thailand. It’s an intersection between roads north, south and west and is also a ferry departure point for Koh Tao. The area is little dived and the reefs here are more healthy with many fewer divers on them than Koh Tao.

International tourism hasn’t reached this area and the atmosphere is laid back. Divers can stay in Chumphon town but better alternatives are to stay at Sai Ree Beach to the south or at Thung Wua Laen beach 15km north.

These relaxed beach resort areas have some simple bungalow accommodation and a few basic bars and restaurants. Both beaches have dive centres offering local day trip dives. If you would like a more Thai style holiday away from the crowds this may be the area for you.

The visibility is not as good as on the west coast of Thailand, especially the sites closer to the coast because of freshwater run off from the Taphao river but there are still many islands with interesting dive sites to explore. More dive sites keep being found and there are potentially dozens of wrecks in the area just waiting to be discovered.

The best time to dive Chumphon is May to October. The best dive sites are clustered together about 1.5km sail east from Thung Wua Laen beach.

Koh Ngam Yai or East Cliff Rocks as it is alternatively known is home to thousands of edible nest swiftlets and locals harvest these nests from the island. The rocky ledges up the island are covered with the workers bamboo huts. They protect the island from trespassers violently and no one should attempt to come ashore here. Diving is done on the east side of the island and the dive site is buoyed. This is a good site for divers and snorkellers. Currents are usually mild and visibility can reach 20m. Maximum depth is 20m. Hard coral is mainly staghorn coral with some vase and lettuce coral. Barrel sponges and sea anemones are numerous.

Koh Ngam Noi is a smaller island just south of Koh Ngam Yai. The best diving is at the southern end of the island where rocks form swim-thoughs. Gorgonian seafans cling to the rocks. This is a good area to find different nudibranch species. Schools of fish include snapper, jacks and yellowtail barracuda. Blue spotted sting rays can be found in the sandy areas.

Hin Lak Ngam is a collection of rocky outcrops 800m to the north of Koh Ngam Yai. The site is buoyed. The maximum depth is 24m but the best section of the dive site is at 10-15m. Currents can be strong which reduce visibility but when currents are favourably weak the visibility can be excellent. Snorkellers can also enjoy this site as the hard coral reef almost reaches the surface. Coral cover is good with all the usual Gulf of Thailand marine life present. Larger pelagics are sometimes seen here.

Koh Lak Ngam is 2.5km south of Koh Ngam Noi and is made up of two rocky outcrops. Maximum depth is 20m with average visibility. Currents are weak to mild. This dive site has very healthy coral cover with staghorn, table, brain, cabbage and black coral varieties. There are also barrel sponges and beds of anemones. Parrot fish are numerous. There are a few titan triggerfish plus pufferfish, porcupine fish, moorish idols, butterfly fish and angelfish.