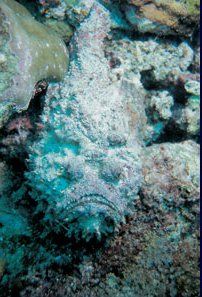 Koh Chang is located on the eastern side of Thailand close to the Cambodian border. It is reached by a short ferry crossing from Trat. Thailand’s second largest island after Phuket is surprisingly undeveloped and retains a very tropical feel with dense jungle in the interior and beautiful beaches along the coasts.

Smaller islands south of Koh Chang such as Koh Muk and Ko Kut are even more remote. The Koh Chang Marine National Park is actually made up of 52 islands and 85% of the park land area is jungle. Most tourist accommodation on Koh Chang is small bungalow resorts although more development is coming.

There are around 10 dive sites regularly dived by Koh Chang dive centres and surely more yet to be discovered in the archipelago. All diving is by boat. Day trips run all year round although June to September is the off season when waves may make some dive sites inaccessible and lower visibility. The best months to dive Koh Chang are November to April.

Hin Luk Bat is a popular site close to Koh Chang with healthy corals on a pinnacle down to 20m deep. Currents are usually weak and visibility averages about 10m. Fish life includes schools of barracuda and snapper plus angel fish and butterfly fish.

The Thonburi Wreck was sunk by the French navy in 1941 off the south east tip of Koh Chang and now sits in 15m of water. The wreck now acts as an artificial reef but visibility is often poor and currents can be strong.

Koh Wai has a fringing hard coral reef that drops down to 20m. This is the best dive site to see reef sharks, leopard sharks and blue spotted sting rays.

Koh Kra is a tiny island with a small fringing reef down to 10m. Blue spotted rays can be seen in the sand and many species of reef fish over the reef. This is a popular snorkeling site.

Koh Rang area is regarded as the best diving around Koh Chang. Visibility is better and marine life more prolific. Most dives are around 10-15m deep. Hin Kaduang pinnacles drop down to 30m and is a good places to see reef sharks and turtles.

Koh Mai Si Lek located off the north west coast of Koh Kut is 2 hours boat ride from Koh Chang. Healthy hard corals such as brain and plate corals are home to an abundance of marine life. Larger pelagics like trevally and barracuda are seen here. Visibility can reach 20m and the maximum depth is 20m.