Formerly the USS LSM 469, was decommissioned by the Royal Thai navy and sunk in 2003 to create an artificial reef just off the coast of Koh Phai about 1 hour boat ride from Pattaya. She sits upright in 30m of water and the shallowest point, the bridge, is 14m below the surface.
There is a mooring line on the bow and the stern. Penetration is possible in many areas including the engine room, the bridge and the radio room.

A cargo ship that sank in the 1930’s after a fire in the engine room and she now sits in 22m of water. She is 88m long and has broken up into three sections. The bow and the stern are still recognisable but the missle section is just twisted metal.

Penetration is not recommended. Currents can be strong. The highlight of this dive is seeing the Eagle rays that regularly pass by. 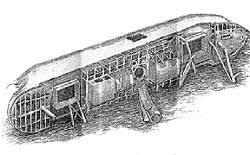 An Indonesian cargo ship that was being used by the Japanese navy and was sunk by an allied aerial attack in world war II. The wreck now sits in 28m of water on her side about 1.5 hours from Pattaya. Currents can be strong here but there are plenty of sheltered areas down on the wreck. Visibility ranges from a good 15m to almost nothing. In the sand there are still two unexploded thousand pound bombs. Penetration is possible for experienced divers only.

The vertical wreck as it was once referred is a 2 hour sail from Pattaya. The tanker sank in 1996 during a heavy storm and was famous for sinking in a vertical position with the bow just 5m below the surface and the stern in 60m. This created a unique multi level dive much loved by technical divers. However the wreck was a hazard to shipping especially as the bow was full of the tankers cargo, LPG gas. In 2001 the vessel re-floated and started to drift. Some lucky divers enjoyed diving on a drifting wreck but when she started to drift into busy shipping lanes the Royal Thai navy acted and after several attempts they were able to detonate charges that sank the wreck again.

The Pak 1 now sits in 42m of water with the shallowest part on 25m. Visibility is rarely more than 10m on the wreck and currents can be strong. This is a popular technical dive.