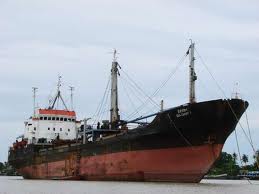 Located just a few kilometres off the coast of Khao Lak close to the entrance to Thap Lamu pier the Seachart 1 wreck was a Thai registered cargo ship of 2,500 tonnes that sank in rough seas in August 2009. She was carrying a cargo of teak logs from Myanmar to Vietnam. The logs worked loose of their holdings causing the ship to roll excessively and take on water. All crew were rescued by the Royal Thai Navy which has a base nearby. She now rests on the sandy seabed on her starboard side in 40 metres of water.

The wreck is 84m long and 12m wide, the shallowest part is at 24 metres making this a dive site for advanced divers only. You must be at least PADI Advanced Open Water with 100+ dives. It’s a good dive site for completing your PADI Deep Diver specialty course. The wreck is best dived with nitrox.

The Seachart 1 has become home to enormous amounts of marine life. Penetration is possible in areas although the wreck is collapsing quickly and becoming more dangerous to dive. The cargo of logs still sit on the sea bed and the huge propellers can still be seen as no salvage operations can take place until legal ownership rights are decided by the courts.