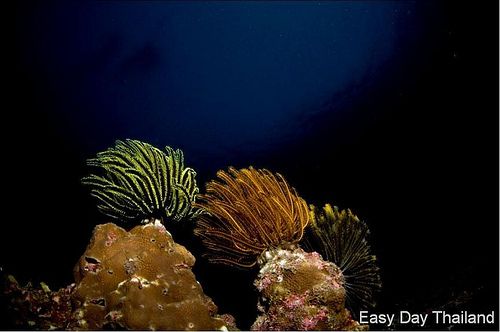 Krabi offers some of Thailand’s most spectacular above water scenery and is a major draw for rock climbers from around the world. The area also has a lot to offer divers.

Most dive centres are located on Ao Nang beach and day trip dive boats depart from either end of the beach each morning.

Divers staying on Railey beach can catch a long tail boat (local Thai water taxi) around Ao Nang beach in the morning in time to jump on a dive boat.

Underwater visibility is never as good on Krabi dives as it is on nearby Phuket or Phi Phi dives, the water can be a little green here. Currents are manageable and there are dives suitable for all levels of divers. Most dives are not that deep, often no deeper than 25m.

There are some caves in this area that are still being discovered and mapped by divers at the extreme end of our sport. The best time to visit and dive Krabi is November to April.

Koh Si is home to schools of snapper and fusilier. In the rocks and around barrel sponges look for scorpion fish, lion fish and many species of nudibranch. Seahorses are sometimes spotted in sea fans. Shy black tip reef sharks can be glimpsed in the blue. This is also a popular snorkeling site.

Koh Yawabon has schools of fish as well as a long swim-through. Coral growth is good here with hard and soft corals, seafans and sea whips. Large groupers are often spotted. Blue spotted stingrays and black spot garden eels can be seen in the sandy areas.

The King Cruiser Wreck sunk half way between Phuket and Phi Phi in 1997. She was a passenger ferry between the two islands until she hit Anemone Reef. She now sits at 32m depth. She is 85m long and 23m wide. The King Cruiser is normally dived on a day trip together with Shark Point or Anemone Reef.

HTMS Kledkaeo (AKS 861) was a Royal Thai Navy supply ship from 1956 until she was decommissioned and sunk as an artifical reef close to Phi Phi in March 2014. Originally built in Norway in 1948 with a length of 47m and a width of 7.7m.

HTMS Ravi (LCT 762) was originally a LCT-800 US Navy tank landing craft built in 1944 which saw service in 1945 during the US World War II Asia Pacific campaign. She was one of 6 tank landing craft transferred to the Thai Navy in 1948. In April 2013 she was decommissioned and scuttled close to Krabi to create an artificial reef. 119′ length, 33′ width, 5′ draft.

HTMS Talibong (LCT 766) is another ex US Navy tank landing craft launched out of Quincy, Illinios on 30 March 1944 and transferred to the Royal Thai navy after World War II. 119′ length, 33′ width, 5′ draft.