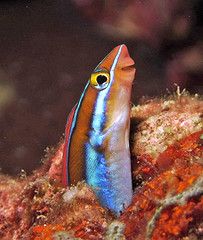 Just off Koh Miang (Similan Island # 4), Anita’s Reef is a relaxing dive along a fringing coral reef that slopes from 5 m depth down to around 26m. It’s an easy dive and makes a nice introduction to the Similan Islands dive sites as a check dive at the start of a liveaboard trip. The white sandy bottom is interspersed with patches of staghorn coral and table corals. There are also so large coral bommies covered with soft corals, sponges and sea fans.

On the hard coral reef look for oriental sweetlips, yellow lined snapper, schooling bannerfish, moorish idols, fusiliers, fairy basslets, lionfish and well disguised scorpionfish. Titan triggerfish and clown trigger fish will both be busy on the reef. The Titan triggers are angry fish and may try to chase you away from their territory. The Clown triggers are far less bold and usually keep a distance. Roundhead parrotfish munch away on the coral seemingly oblivious to passing divers. Goatfish are usually nearby to sweep up what the parrotfish leave behind.

On the coral bommies watch the multitude of smaller reef fish, dart in and out of shelter as bluefin trevally sweep in to attack in fast hunting raids. Brush away the thousands of glassfish that cover sections of the bommies to get a look inside coral cracks before the space is filled again by a wall of fish. Inside those cracks look for hingebeak shrimps and banded boxer shrimps among others. These sheltered spaces are also a refuge for juvenile fish. If you are lucky you may get to see the beautiful juvenile Emperor Angelfish.

On the top of the bommies anemones host anemone fish as well as porcelain crabs. Hermit crabs are also in abundance. Banded sea snakes also like to hunt on the bommies. In the sandy patches blue spotted Kuhl’s stingrays can be found buried with just their eyes and the tip of their tail visible. Patches of garden eels are numerous and divers can get pretty close before they retreat into their holes. Shrimp gobies can seen working their hole with the help of their snapping shrimp partners.