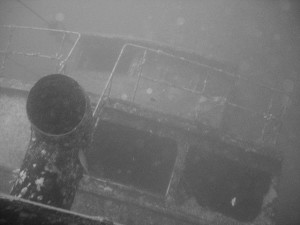 Located all along the east side of Koh Similan (Similan Island number 8), Beacon Beach dive site is part of Beacon Reef and along with Beacon Point to the south, forms the longest reef in the Similan Islands. It’s an easy sloping reef of predominately hard coral and makes a good check dive to start a liveaboard trip.

There are mooring buoys along the length of the reef. The protection of island number 8 makes this a safe haven for dive boats that venture to the Similan islands in the rainy season and then get caught out by bad weather and some divers may find themselves doing more dives on this dive site than they had bargained for.

A fairly recent addition to the reef about half way down is the wreck of the Atlantis X liveaboard that sank in August 2002. It sits upright on the bottom with the bow pointing up the reef in about 16m of water and the stern sitting at around 30m. The upper deck has slipped and now hangs off the port side. This is not one of the world’s great wrecks by any means but it’s a good place to start a Beacon Beach dive. Lionfish and scorpionfish are already in residence and corals are starting to take a hold. Glassfish and juvenile fish inhabit the inner parts of the wreck.

Divers can check out the wreck before moving off either north or south, depending on the current. South takes divers onto Beacon Reef (called Morning Edge by some dive boat operators). Hard corals slope down to 35m and visibility is usually in excess of 20m. There is a massive variety and colour of hard corals that create a beautiful habitat for big and small tropical fish. Large orange gorgonian seafans cling to bommies on the deeper sections on the reef. Fish life here includes triggerfish, parrotfish, filefish, trumpetfish, moorish idols, sweetlips, bigeyes and fusiliers. Nudibranchs and sea slugs are also common.

At the southern tip of Beacon Reef and island number 8 is Beacon Point dive site, named because, you guessed it, there’s a beacon on the point, it is also sometimes referred to as Monkey face rock because the rock at the surface resembles a monkeys face.

Beacon Point features large patches of hard coral reef as well as large boulder formations and drops down deep to 55m. Large pelagics like Manta Rays and Eagle Rays can be seen here.