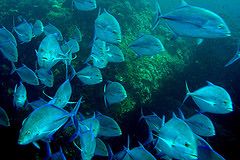 Located at the southern point of Koh Miang (Similan Island number 4), Chinese wall is called Bird Rock by some Thailand liveaboard boat operators. Granite boulders above the surface continue underwater down to a depth of 30m. These rocks form swim-throughs, valleys, caverns and caves that can make this site a divers playground.

It is a good idea to carry a flashlight on this dive to see the true colours on the rocks at depth. There are also some coral gardens in the shallower areas of the dive site.

Currents are usually not a problem at Chinese Wall, although sometimes can be strong. Visibility is usually above 20m and often as good as 40m. Many boats don’t dive this site which is a bonus for the ones that do.

In the deeper areas look out for white tip reef sharks. Small whitetips can also be seen hiding in some of the rock crevices. Giant moray eels also like the gaps in the rocks as do fimbriated moray, yellow margined morey and smaller white eyed moray. Cleaner shrimpos can often be seen feeding off the moray skin, one of many symbiotic relationships to be observed in the Similan Islands.

While moored near island number 4 many boats send customers ashore to see the beach. There is a small national park rangers station here that has a trail leading to another beach and a small holiday home belonging to the Thai princess.