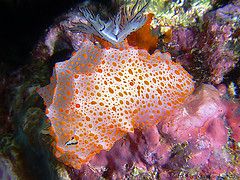 On the western point Koh Bangu (Similan Island # 9), Christmas Point is one of the best and favourite Similan Island dive sites. Visibility is always excellent. Currents are average but can be strong at certain times of the month. There is a mooring buoy that is often used for descent at the start of the dive. Maximum depth is 35m.

Marine life is prolific, even the occasional whale shark or manta ray cruises by. This is a big dive site and could be dived more than once.

Christmas Point is another Similans dive site where giant boulder formations create spectacular underwater scenes and you’ll find some of the best swim-throughs around here.

Tunnels of rock are covered with colourful soft corals and seafans. Sunlight streams through underwater archways. Giant sea cucumbers and blue sea stars also cling to the rocks. Thousands of glassfish fill any available gap and move as one when divers swim through. Schools of trevally make raid after raid on the small bait fish. Barracuda patrol the blue.

Leopard sharks can be seen in the sandy areas around the edge of the rocks. Also look out for blue ribbon eels in the rubble, as well as nudibranchs of which there are many. Titan triggerfish and clown triggerfish can both be observed, as can Indian triggerfish that dive into the rocks when divers get too close.

Dog faced puffer fish, porcupine fish and parrot fish are also active. Keep an eye out for scorpionfish on the rocks or camouflaged on the sea floor under swim-throughs. Lionfish also like to hang out around the swim-throughs.

On the shallow eastern section of Christmas Point the reef is mainly made up of hard corals. Table corals are a shelter for smaller reef fish. Sea anemones are home to clownfish such as Clark’s anemone fish.