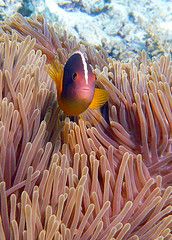 Located north of Koh Haa (Similan Island number 5), Coral Reef is an easy dive site for all levels of diver with good visibility and a maximum depth of 30m. It may not be the most exciting Similan dive site but it’s very pleasant all the same.

It’s a good shallow dive with much of the marine life between 8m to 15m deep so it’s a good third dive of the day after the deep morning dives. This dive site is also suitable for snorkellers.

In the deeper areas look out for blue spotted Kuhl’s stingrays buried in the sand. They hide themselves well so that only their eyes protrude from the sand but if they think that they’ve been spotted they swim away with a suprising turn of speed.

Black tip reef sharks can also be seen patrolling on the edge of the reef although reef sharks are not as common in the Similan Islands as they once were, another case of Asian fish stocks suffering at the hands of fisherman.

Patches of Garden eels sway in the gentle current until divers get too close and they dip down into their holes.

The hard coral reef here is mainly staghorn coral but with many other varieties interwoven with it such as brain coral, fire coral and lettuce coral. Giant moray eels can be seen, as can banded sea snakes. Moray eels are not venomous but their eye sight is poor and their serrated teeth would really make a mess if they mistook your hand for food. Sea snakes are very venomous but are also totally docile and nothing to be feared.

A myriad of smaller reef fish inhabit the reef including snapper, fusilier, surgeonfish and sweetlips. Schooling bannerfish congregate over the reef, and the similar looking moorish idol can be seen in smaller numbers. The occasional lone barracuda can be spotted out in the blue. Longfin batfish are present in small schools.