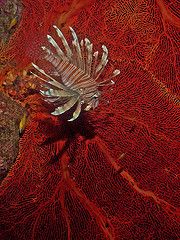 Located just to the north of Koh Pabu (Similan Island number 7) Deep Six is, as the name suggests, a deep dive site. Gigantic granite boulders form a rocky ridge that start just 5m below the surface and plunge down beyond 40m.

Currents can be strong at Deep Six so this is a dive site for intermediate to advanced divers. Dives typically involve descending deep then working your way up along the ridges. In the deeper areas of the dive whitetip reef sharks can be seen circling and leopard sharks rest in the sand. Blue spotted Khuls rays are also in abundance.

The boulder ridges are home to gorgonian sea fans, table corals and featherstars with sea cucumbers and blue sea stars also hanging on. Moray eels are numerous. Emperor angelfish are present as well as parrotfish, and triggers. Fusiliers are many in number.

Rainbow runners make an impressive sight as they move together in large schools. Bluefin trevally can be seen hunting smaller prey as can the odd giant trevally and dogtooth tuna. In the shallower hard coral reef section all the usual Similan Island reef fish are present including bannerfish, butterfly fish, dog faced puffer fish, trumpet fish, snapper and sweetlips. Turtles are sometimes seen feeding on the reef.

Lucky divers may see a passing pelagic like a whale sharks or a manta. Barracuda also circle out in the blue.

It should be noted that Deep Six was one of the few Similan dive sites to be badly damaged by the tsunami that hit Thailand on 26 December 2004. Most dive sites escaped unscathed but Deep Six was not so lucky and broken coral and seafans can be seen.