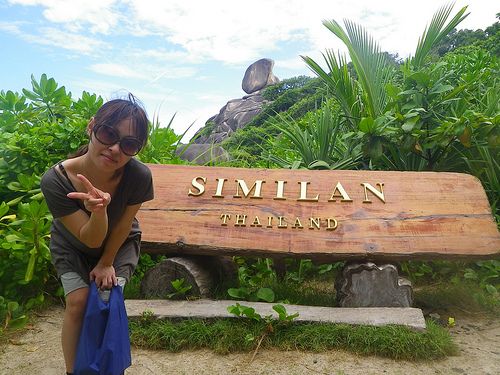 Donald Duck Bay is located on the north side of Koh Similan (Similan Island Number 8) and is named after a pile of rocks on the east side of the bay that look like Donald Duck’s head (best viewed from outside the bay on the east side looking in).

That pile of rocks must be the most photographed in the Similan Islands and can be climbed if time permits between dives to give a wonderful panoramic view of the surrounding islands and turquoise waters below. Donald Duck bay is sometimes referred to as M16 or Cambell’s Shoe Bay and the top rock that photographers like to pose next to is called sail rock.

The bay is a good natural shelter and many of the liveaboard boats moor here in the evenings. It is also a popular place to bring day trippers snorkeling. It’s not the best dive site however, at least not for a day dive, more suitable to diver training because of it’s shallow depth and minimal currents.

The bay is an excellent night dive location though. A number of coral bommies separated by patches of sand are homes to a myriad of different shrimp species which can be heard crackling away on the dive. Decorator crabs are numerous as are squid and cuttlefish. Moray eels can be seen swimming at night and green turtles are also common. Painted rock lobster can also be seen.