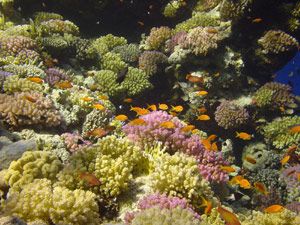 Located along the east side of Koh Pabu (Similan Island number 7) East of Eden is one of the Similan Islands best and most beautiful dive sites. It’s an easy dive for any level of diver, even when currents are present divers can just drift with the current, no need to fight it.

Visibility is always good. Maximum depth is 35m where the reef slopes off into the sand. The reef starts at 5m. This is also a good spot for snorkelers.

The entire reef has incredible soft corals from shallow to deep water but the highlight of the dive is a huge coral bommie covered in a variety of soft corals, sponges, anemones and fish.

This bommie is big enough to spend an entire dive on and a National Geographic team once spent a week filming in just this one place. It is definitely worth doing more than one dive here. The bommie is located half way along the reef. It starts at about 9m under the surface and goes down to 30m.

In some of the smaller outcrops of coral around the bommie it’s possible to find frogfish along with many scorpionfish and lionfish. Banded sea snakes also hunt in this area. On the bommie itself the coral is dense and any crevices are filled with glass fish. Sweep them aside with your hand to see boxer shrimp and hingebeak shrimp inside.

Emperor angelfish circle the bommie and if you are lucky you may spot a beautiful juvenile emperor angelfish. Look in the seafans for longnose hawkfish. Coral grouper are one of many fish that have made the bommie home. Others are oriental sweetlips, damselfish and anthias.

Just to the north of the big bommie is a patch of coral home to Emma the friendly giant moray. This eel has become famous in the Similan islands for coming out of it’s hole and swimming around divers. Be warned though that it 2006 Emma bit off a divers thumb when he tried to feed her a sausage.

Elsewhere on the reef huge orange and red gorgonian seafans are everywhere and in perfect condition. Leopard sharks and blue spotted rays can be seen out in the sand at the edge of the reef.

Turtles are often seen on the reef and eagle rays occasionally pass by. Schools of blue lined snapper are everywhere, as are fusiliers. Butterflyfish and parrotfish will be seen as will Titan triggerfish and Indian triggerfish. Trumpet and cornet fish are also numerous.