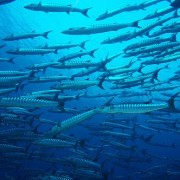 There are currently 28 known species of barracuda, one of most commonly found in the seas around Thailand is the Chevron Barracuda.

If you see a barracuda (members of the Sphyraenidae family) when diving around Thailand, you’ll definitely recognize it. These fish have a rather menacing appearance (although they aren’t a threat to humans). Barracuda’s have an elongated body and prominent fang like teeth with an under bite. Chevron barracuda have grey scales, with a silvery stripes on their sides and a white belly.

The very distinct markings on its body make it one of the easier species to identify. The Chevron Barracuda size averages between 30-60 cm but can be as big as 165 cm.

Found in tropical and subtropical oceans worldwide, Chevron Barracuda fish hang around near the surface of the ocean and around coral reefs and sea grass. Good dive sites in Thailand to see schools of chevron barracuda are Racha Noi North Point, Richelieu Rock and Koh Tachai.

These fish are carnivores and extremely skilled predators. Their diet consists mostly of other smaller fish, such as mullets, snappers and grunts. With their keen eyesight, they are attracted to shiny, metallic objects which remind them of fish scales, so avoid wearing jewellery when diving.

All species of barracudas hunt with lightening speed (up to 50 kph) and accuracy, using their natural surroundings to set up ambushes for unsuspecting prey.

There is very little information documented about the barracudas reproductive habits. Females spawn a couple times throughout the year, releasing between 5.000- 300,000 eggs each time. The fertilized eggs simply float in the water until they hatch.

Since there aren’t many natural predators to the larger species of barracuda, they can live anywhere between 10-15 years. Newly hatched barracuda settle in shallow estuaries where they are protected by the vegetation and have a constant source of food until they grow large enough to venture out into open waters.

Although many larger species prefer to live alone, Chevron Barracudas tend to school together.