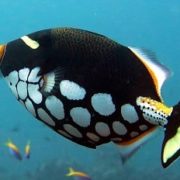 Also known as the bigspotted triggerfish, Clown Triggerfish (a member of the Balistidae family) are demersal marine fish commonly found on dives in the Indo-Pacific. They aren’t usually shy of divers, but will retreat if you get too close. 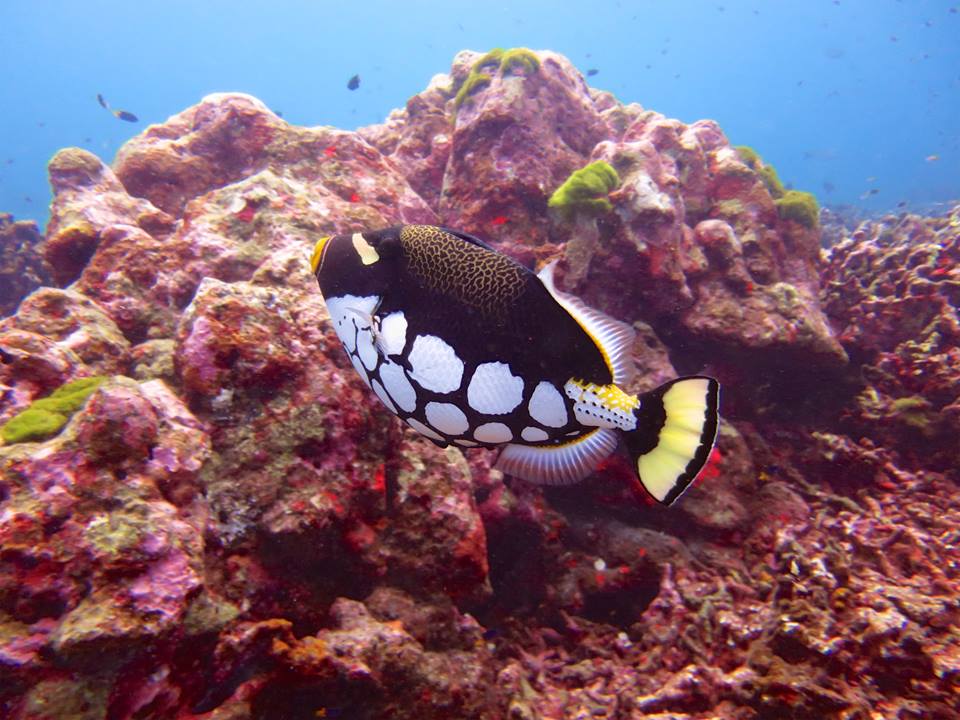 With its dramatic colouration, you won’t miss the clown triggerfish if you ever come across it whilst diving. Although mostly black, the bottom half of its body and belly is covered with white spots, reminiscent of leopard print. The clown triggerfish has an oval-shaped body, laterally compressed, and a large head. Don’t be deceived by its small mouth; it hides strong teeth.

Clown triggerfish grow up to 50 cm in the wild.

The clown triggerfish is widely distributed throughout shallow tropical and subtropical waters in the Indo-Pacific Ocean and can also be found in the Caribbean.

Adults live on sloping reefs up to 75 m depth, whereas juveniles stay around sheltered caves and overhangs.

Clown triggerfish have quite a varied diet, based on molluscs, echinoderms and crustaceans, which they crush using their strong teeth. They are voracious eaters and spend the majority of their time foraging for food amongst the coral.

Unlike many other fish, the clown triggerfish digs a shallow crater, or nest in the sand, where the female lays her eggs. The males then fertilize the eggs and both sexes guard the nest aggressively, with no hesitation in attacking divers who get too close.

When the eggs hatch, the larvae simply float away on the ocean currents.

Clown Triggerfish are solitary creatures and spend most of their lifetime alone, except when they come together for mating. They defend their territory aggressively and can frequently be seen attacking other fish if they venture to close.