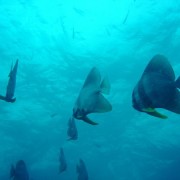 The batfish that you’ll most likely see around the reefs of Thailand is the Teira Batfish (Plantax Teira), also known as the Tall-fin Batfish.

There are five species of Teira Batfish currently known and they are very curious creatures. They often like to investigate divers and follow them around before returning to their group.

The Tall-fin Batfish is the largest of its species, growing up to 70cm in length.

Batfish tend to spend most of their time in shallow tropical waters and make their homes around coral reefs and shipwrecks. Their numbers are most concentrated in the reefs around Northern and Western Australia and the Indo Pacific. At certain times of the year, the adults move locations, to find new sources of food, or to reproduce.

As omnivores, Batfish eat plankton and marine algae, as well as small invertebrates. They have also been seen eating dead jellyfish.

Very little is known about the reproductive activities of Batfish, except that they spawn in the open ocean, rather than in shallower waters. When the juveniles grow to around 20 mm in length, they settle around reefs or lagoons where they are protected from predators.

Juvenile Batfish tend to live by themselves until they are fully matured, seeking the shelter of coral reefs. They use mimicry to camouflage themselves and blend in with seagrass or coral rock. They also mimic the colour of poisonous or inedible sea creatures to deter predators.

As adults, Batfish are peaceful and social fish, usually forming schools with others of their species. This is also a method of defence when exposed in the open ocean.