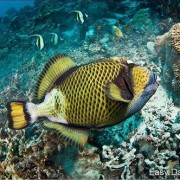 Also known as the giant triggerfish or mustache triggerfish, the titan triggerfish (Balistoides viridescens) is an unusual looking creature. It is found throughout most of the Indo-Pacific and is rather wary of divers. It can occasionally be aggressive towards humans if they get too close to a nesting site. 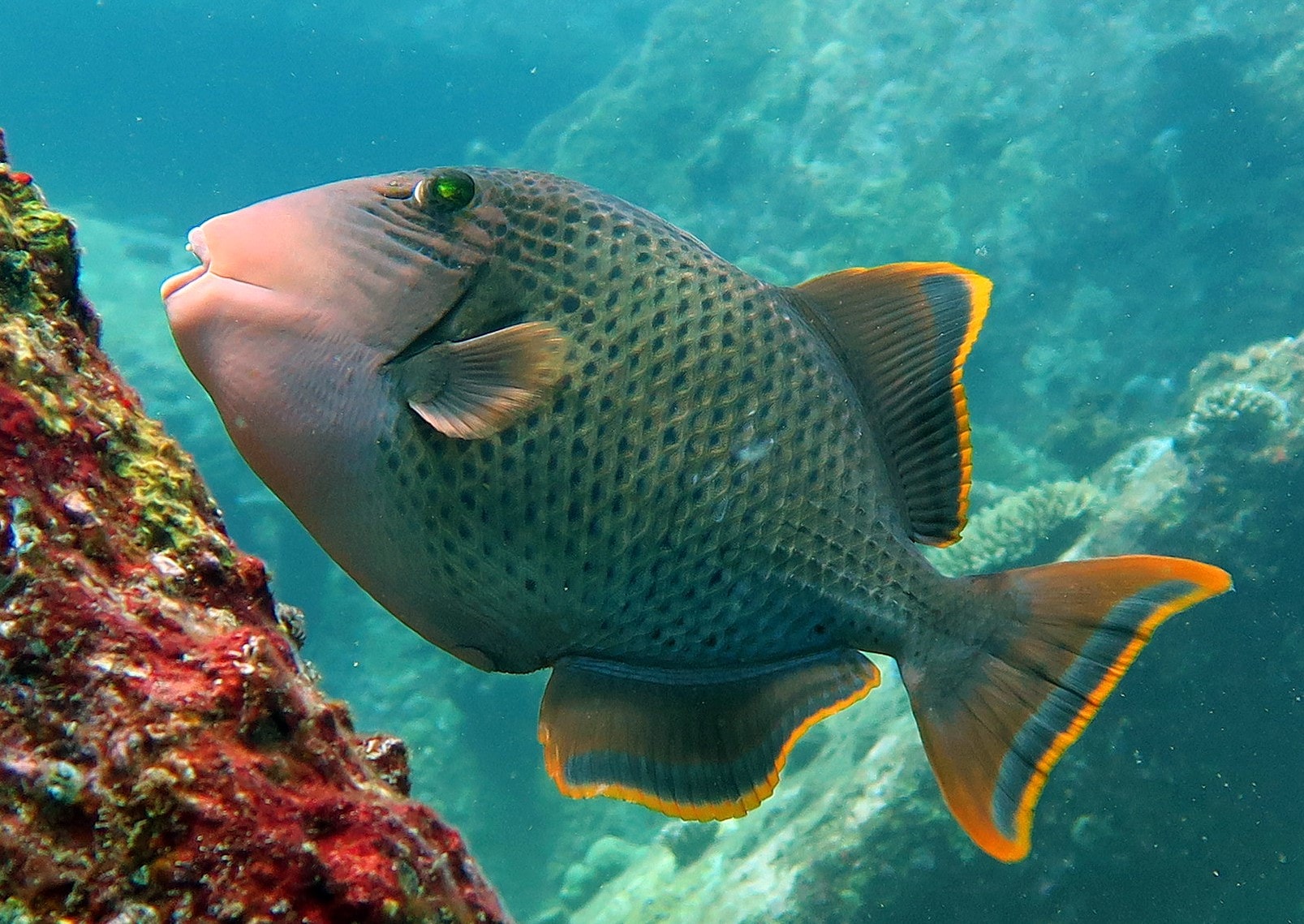 Titan triggerfish aren’t striking like many other tropical fish and at first may not seem all that interesting. They are shaped like a rhomboid, with heavily scaled bodies that are generally green or dark grey in colour. They have dark markings above their mouth, reminiscent of a mustache, and black edgings on their fins. They also have extremely powerful chisel-like teeth that can cause serious injury.

Titan triggerfish can reach 75cm and are the largest species hence the name ‘titan’.

This particular species is usually found in lagoons and is a common sight around tropical reefs. Dense reefs where there is a plentiful supply of food is most likely where you’ll find large numbers of triggerfish.

The Titan triggerfish eats sea urchins, molluscs, crustaceans, tube worms and coral. It spends its time turning over rocks, biting off pieces of coral and stirring up sand, looking for food. Other smaller fish tend to hang around the titan triggerfish so they can feed on the detritus and smaller organisms.

The titan triggerfish also feeds on marine algae. On some tropical reefs, the natural poison ciguatoxin may be secreted, which is harmless to fish, but harmful to humans, which means that eating the fish or receiving a bite can be dangerous.

This particular species of triggerfish makes its nest on flat, sandy areas in between small corals. The eggs are fertilized externally, with the female laying them in a dug-out depression in the sand. Triggerfish only spawn for 4 days every month. Both the male and female will guard the nest vigorously against intruders.

Before laying their eggs, the triggerfish search for mating partners and are known to perform mating ‘dances’ to impress their partner, before reproducing.

Once titan triggerfish eggs hatch, the swim away from the nest towards the protection of the coral reefs. Titan triggerfish spend the rest of their life alone, rarely spending time in pairs or larger schools, unless mating. They can be aggressive towards other fish and are very territorial.