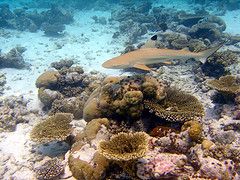 Koh Bida Nok (outer father island in Thai) like nearby Koh Bida Nai, is small limestone island that rises dramatically from the sea to the south of Phi Phi Ley. It is similar to Bida Nai in many ways with a fabulous variety of colourful hard and soft corals, barrel sponges and gorgonian sea fans.

There is a shallow sheltered bay on the east side which is often the start point of the dive. The bay is a sandy bottom with coral bommies scattered around. Large brain corals and table corals are covered in shoals of small fish. Sea urchins make finding a patch of sand to kneel in difficult. Sea cucumbers and blue starfish also litter the sea bed. Blue spotted sting rays can be seen here as can mating cuttlefish.

Heading south out of the bay takes divers over a thick garden of soft corals and anemones where octopus and banded sea snakes are regularly sighted.

Much of the rest of the dive site is wall diving down to a maximum of 30m with coral covered boulders out from the edge of the wall. Moray eels are all over the walls including giant moray, yellow margined moray and white eyed moray. Anemones and their resident clownfish are also numerous. Cracks and crevices are full of shrimps, crabs, rock lobsters and many species of nudibranch. Jumbled boulders create a small swim-through on the south side. Glassfish block the entrance and part as divers swim through.

Leopard sharks can be seen anywhere on the dive site. Blacktip reef sharks are more common on the north side. Whale sharks occasionally pass by. Hawksbill turtles are usually seen munching coral on the south side wall. Look up and you are sure to see longtoms swimming just under the surface.