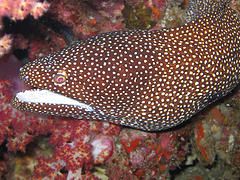 Located just off the southern point of Koh Haa (Similan Island number 5) Hideaway bay is often referred to as Barracuda point however schools of barracuda are not that common here.

This is an interesting dive site because it combines some of the best features of Similan diving with some parts of the dive being mostly large boulders and other sections being fringing coral reef. Visibility is generally above 20m and currents are normally mild making this dive site suitable for all levels of diver. Maximum depth is 35m and the reef comes up as shallow as 7m.

The southern section of the dive is the deepest which is where the large boulders are. The deeper boulders have sheer clean surfaces with little coral growth but as you move shallower the rocks have soft coral, gorgonian sea fans and sea whips attached as well as sea stars, urchins and sea cucumbers.

Blue spotted Kuhl’s rays can be seen in the sand as can black spot garden eels. Batfish are normally in evidence along with emperor angelfish. Clown triggerfish can also be seen and maybe a solo giant barracuda out in the blue. Black tip reef sharks can also be seen away from the reef.

Moving futher north divers come to the sloping reef at around 20m. There are colonies of staghorn with brain coral, lettuce coral and fire coral among others. Christmas tree worms and crinoids add splashes of colour.